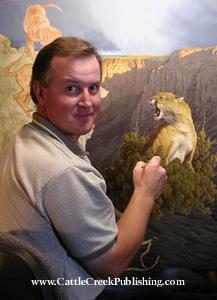 Tom Mansanarez, his wife and two daughters, make their home in Idaho Falls, Idaho, just west of Jackson Hole, Wyoming. He is third among four brothers, all of whom share the artistic talent of their father, Manuel Mansanarez.

Tom is an outdoorsman and an avid horseman. He enjoys a versatile artistic ability that has been developed virtually from infancy and considers it “a God-given talent”. He has many areas of artisic interests, but wildlife is his most intense focus. He has painted African, European, and Asian wildlife, but has focused in recent years on North American and African wildlife.

Tom´s artistic objective is to capture reality without idealizing it, to recreate the drama in wildlife without fictionalizing it. His work continues to grow in richness, composition, and refined detail. 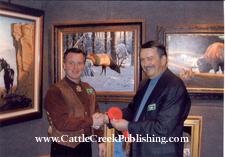 Tom is a member of the Society of Animal Artists. His work is collected by many art enthusiasts throughout the world. He has been juried into various art exhibitions, including the Pacific Rim Art Expo and Southeastern Wildlife Expo.

Tom was a Featured Artist at the “Reflections of Nature Art Show” in Fallbrook in 2001. In March, 2002, he was chosen “People’s Choice Artist” at the Natureworks Art Show in Tulsa, Oklahoma, and his painting “Mountain Fury” was given an “Award of Excellence”.

Again, in 2003 Tom was “People’s Choice Artist” and “Winter Lace” won an “Award of Excellence”. Articles in “Wildlife Art”, “U.S. Art” and “Informart” have featured Tom and his art. Historically his work appreciates steadily in value. 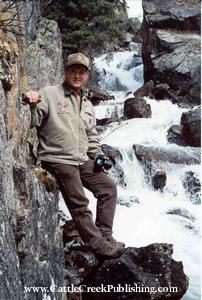 Tom has contributed to many wildlife foundations and conservation efforts throughout North America. He was chosen as Featured Artist by the National Wild Turkey Federation for 2005.

Tom is one of the artists featured in the book: “Wildlife Art: 60 Contemporary Masters and Their Work”.

Tom’s limited edition prints are published by Tom Mansanarez Studio in Idaho Falls, Idaho. Of the 75 editions printed, 42 are sold out.